See what has gone on in the Milton Real Estate market for the month of October along with year over year comparisons. Learn why buying realty in Milton MA is a popular choice including information on town history, schools, demographics and more. 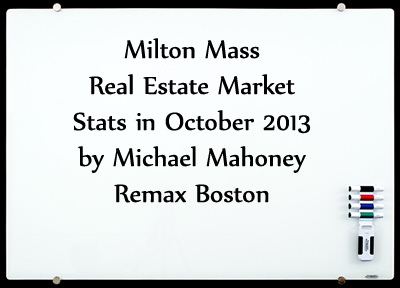 The average market time for the homes that closed for October of 2012 was 103 days.

The average market time for the homes that closed for October of 2013 was 83 days.

Homes Under Contract For October 2013

Traditionally, it might be a much slower time of year for Real Estate, but that does not appear to be the case at the moment.

Of the 39 homes that went under contract, only 4 have gone under agreement at the time of writing this blog post.  9 of the homes under contract still have to clear their contingencies. This could be their home inspection, mortgage contingency or something of other significance.

For most of this year there have been homes that have received multiple offers with sale prices being bid up over asking. The Milton real estate market right now is completely different than it has been over the last few years from what we have experienced. There has not been a better time to sell a home in Milton in a very long time.

Click the link to see all Milton Massachusetts Homes For Sale.


See All Homes for Sale in Boston Under 400k

See All Homes Over 1mm in Greater Boston

Get the Value of Any House Now

See how much equity there is in your property now
@ YourEquityFinder.com

The comments to this entry are closed.